My Beginnings As A Photographer

At the age of thirteen I joined the school camera club and became a passionate devotee of the darkroom and the craft of photography. By the age of fifteen my work was appearing in the Sunday magazine of The State, the largest newspaper in the state published in Columbia, the state capitol, where I lived. 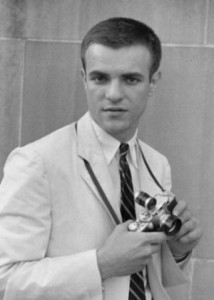 Manos at Age 18 with First Leica

In those days there was usually one person in high school who had the camera with f/stops and shutter speeds and used a exposure meter. That was me: I had two Rolleiflexes and made all the pictures for the school newspaper and yearbook. Ditto at the University of South Carolina, where I was the photographer for the newspaper and yearbook.

But from age thirteen I knew I wanted to be a photographer. But what kind of photographer and how would it happen was the big question. At that time I was a subscriber to Popular Photography magazine (and still am), and in one issue I saw an article about a photographer named Henri Cartier-Bresson – who was a founder of a photographic agency named Magnum. At last I had found my mentor, even though he was far away in France. And I had also found where I wanted to be, in Magnum Photos.

My immediate goals were to find out what kind of camera and film Cartier-Bresson used. On Main Street there was a big camera store with a big KODAK sign outside. I went in and asked them if they had any Ilford film. “What is that?” they replied, but finally ordered some for me. Somehow I managed to purchase a Leica IIIf with a 50mm lens.

Now, I had to make some special pictures with this new film and new camera. I had read of an isolated island off the coast of South Carolina inhabited by African-American people who were descendants of the island plantation’s original slaves; they made their living gathering oysters and crabs. Taking some days off from my studies I made my way to Daufuskie Island to try to make some serious pictures with my new camera and film. In my head were Cartier-Bresson’s admonitions about not cropping and capturing the “decisive moment.”

As soon as I could I took the Greyhound bus to New York with my Daufusikie Island prints under my arm and visited the office of Magnum Photos. One of the first people I met was the president of Magnum at the time. Intimidated and nervous, I told him I did not now how good my pictures really were (they were
good and still are) and told him I was thinking of either being a photographer or and English literature professor. He told me he thought I should be a professor.

Later in the office I met Cornell Capa, who invited me to come have a drink with him. I was still eighteen years old and had never been in a bar. He asked what I would like to have, and I replied “the same as you.” It was my first taste of Scotch, and I have been drinking it ever since. After graduation and two years of Army duty I went to New York, where I stayed in touch with Magnum and actually did some work for them when they needed a spare photographer.

Fast forward to 1962, and I am in Greece making pictures for a projected book. I learn that if a stay in Greece longer than a year I will be drafted into the Greek army because I am a Greek, unless I can prove otherwise. Impossible.

About a year later, in 1963, I am in a remote village on top of a mountain on a Greek island when I receive a large envelope filled with my mail, forwarded to me by a friend in Athens. Inside is a letter from Magnum Photos informing that the annual meeting was held recently, and I am invited to become an Associate in Magnum Photos. Later I learned that they liked the pictures in the box I left in Paris – pictures that would eventually appear in my book A Greek Portfolio.

Fifty years have passed since I received the letter from Athens.